Added to wishlistRemoved from wishlist 0
Add to compare
Category: Spray 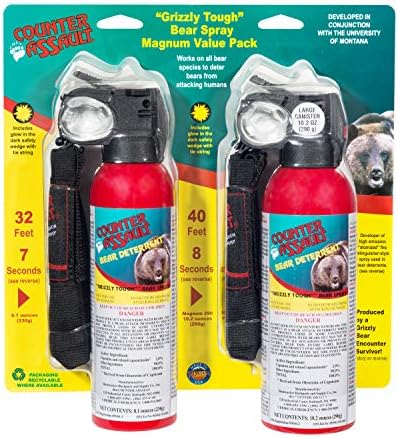 Counter Assault Bear Deterrent has been an effective means of non-lethal protection from wildlife and bears since it was first developed, in conjunction with the University Montana, in the early 1980s. Dr. Charles Jonkel and Carrie Hunt of the University of Montana Border Grizzly Project generated the scientific data that proved Counter Assault’s proprietary formula and delivery system successfully deterred bears from aggressive encounters in a non-lethal manner, and it has remained an integral part of many explorers’ kits since.

World Class Protection and Innovation for Your Safety

Counter Assault received the 1998 Grizzly Bear Stewardship Award, presented by the Interagency Grizzly Bear Committee, in recognition for the research and development of bear spray conducted in conjunction with The University of Montana Border Grizzly Project from 1980-1982.

Bears can run up to 30 mph (44 feet per second), which means that you don’t have time to mess around and certainly won’t win a footrace. No matter how strong you are, a bear will always be stronger, so getting into a fight with one is not optimal either. Studies have shown that using bear spray results in a 92% chance of an attack being deterred, saving your life and/or the bear’s life as well.

Counter Assault not only cares about their customers and the bears they may encounter, we also care about the environment. The bear spray meets all EPA requirements for the Significant New Alternative Policy (S.N.A.P) of the clean air act regarding ozone depleting substances. The bear spray can be brought anywhere in the U.S. and Canada.

Includes one 10.2 oz spray can and one 8.1 oz spray can with holsters
32 to 40 foot spray distance with 7 to 8 second spray duration
Works on all bear species to deter from human attacks
Produces the optimal combination of spray time and distance
Features a glow in the dark safety wedge with tie string

Added to wishlistRemoved from wishlist 0
Add to compare
$3.98
50%